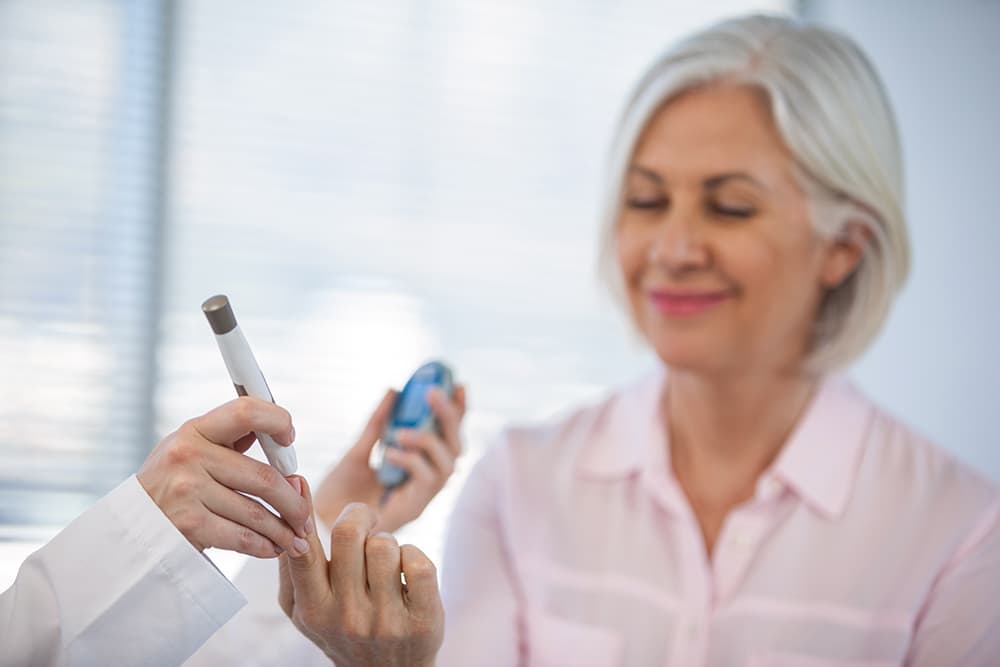 Diabetic eye disease refers to a group of eye problems that people with diabetes may face as a complication of diabetes. All can cause severe vision loss or even blindness. Diabetes can lead to damage of the retina – a condition called Diabetic Retinopathy.

Diabetes is a chronic health condition where the body is unable to produce enough insulin and properly break down sugar (glucose) in the blood. Symptoms include hunger, thirst, excessive urination, dehydration and weight loss. The treatment of diabetes may require daily insulin injections, proper nutrition and regular exercise. Insulin is a hormone that is needed to convert sugar, starches and other food into energy needed for daily life. Both genetics and environmental factors such as obesity and lack of exercise contribute to the cause of diabetes.

What are the signs?

Diabetes is a serious medical condition characterized by high levels of glucose in the blood. Glucose is a simple sugar that comes from the food you eat. When your stomach digests food, glucose is absorbed into the bloodstream. The glucose circulates in your blood and serves as the main source of fuel for all the cells in your body. 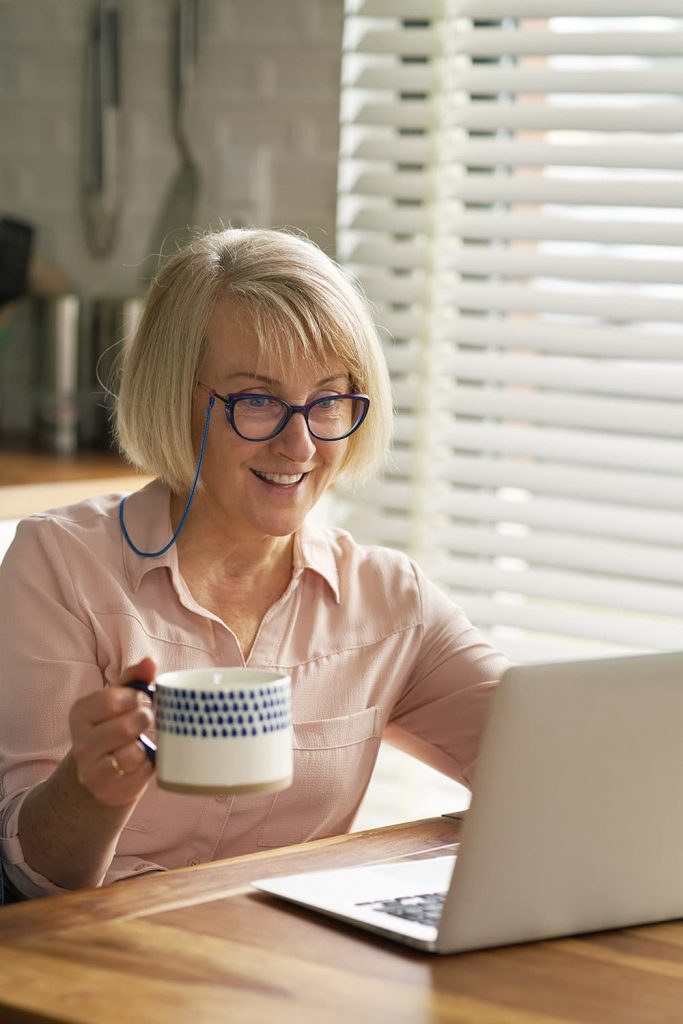 Your Eyes and Diabetes

Diabetes is the leading cause of vision impairment among working age Americans. Diabetics, as a group, have 25 times the usual risk of vision loss. Diabetes causes damage to the fragile, small blood vessels in the retina and can lead to a disease called diabetic retinopathy.

5.7 million Americans are unaware they have diabetes. According to a report issued by the Centers for Disease Control, recent statistics show that there are approximately 24 million children and adults in the United States who are known to have diabetes. Unfortunately, another 5.7 million people are unaware they have the disease, and another 57 million Americans have “pre-diabetes,” defined by blood glucose levels above normal, but not reaching the level for diagnosis of diabetes.

Type 1 Diabetes (also known as insulin-dependent diabetes) is an auto-immune disease where the body’s immune system destroys the insulin-producing beta cells in the pancreas. This type of diabetes, also known as juvenile-onset diabetes, accounts for 10-15% of all people with the disease. It can appear at any age, although commonly under 40, and is triggered by environmental factors such as viruses, diet or chemicals in people genetically predisposed. People with type 1 diabetes must inject themselves with insulin several times a day and follow a careful diet and exercise plan.

Type 2 Diabetes (also known as non-insulin dependent diabetes) T2DM is the most common form of diabetes, affecting 85-90% of all people with the disease. This type of diabetes, also known as late-onset diabetes, is characterized by insulin resistance and relative insulin deficiency. The disease is strongly genetic in origin but lifestyle factors such as excess weight, inactivity, high blood pressure and poor diet are major risk factors for its development. T2DM patients may have no symptoms or be minimally symptomatic, but still have damage to their eyes, heart, kidneys, brain and peripheral nerves from the high levels of circulating glucose. T2DM may be treated by dietary changes, exercise and oral medications. Insulin injections may also be required. 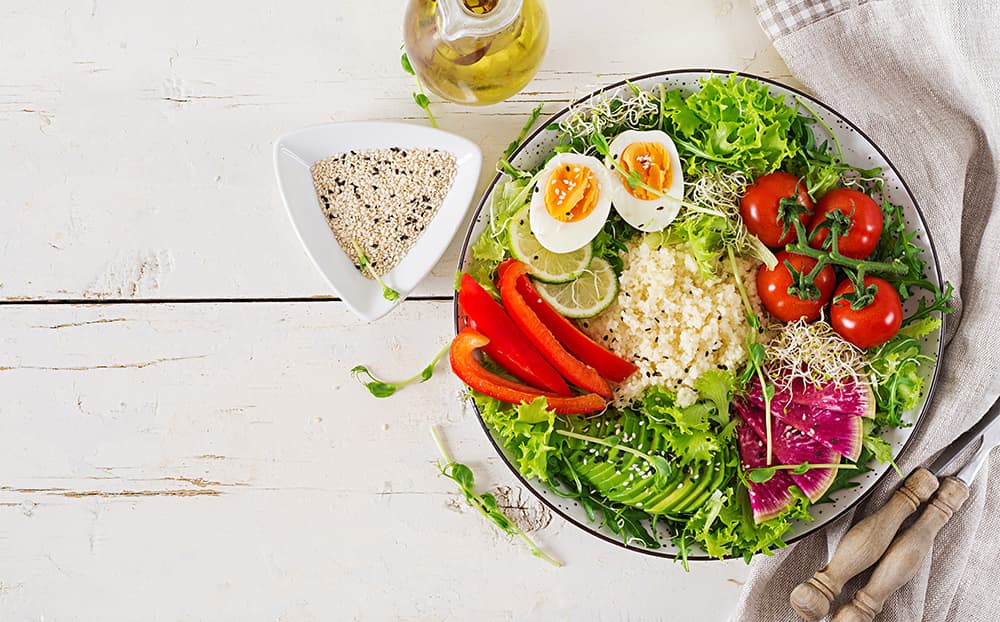 Begin with a healthy eating plan. Healthy eating means eating more whole grains, fruits, and vegetables, and less meat, sweets, and fat every day. Be physically active every day to help prevent weight gain and improve blood sugar control. Check the sugar in your blood and take your medication every day if needed.

What is Diabetic Eye Disease?

How Does Diabetes Affect the Retina?

Diabetes can lead to damage of the retina – a condition called Diabetic Retinopathy. The longer a patient has diabetes the more likely he or she is to have diabetic retinopathy. However, some patients may already have diabetic retinopathy when they are diagnosed with diabetes. Over time, the high circulating levels of sugar in diabetic patients damage the circulatory system of the retina (and blood vessels throughout the body including the heart, brain and kidneys).

The earliest phase of the disease is known as Background or Non-Proliferative Diabetic Retinopathy. In this phase, the arteries in the retina become weakened and leak, forming small, dot like hemorrhages. These leaking vessels often lead to swelling or edema in the central region of the retina called the macula. This condition called diabetic macular edema can cause distortion and blurriness of the central vision.

If diabetes is not well controlled, the damage from high blood sugar can cause the retina to become oxygen-deprived or ischemic. New fragile vessels develop as the circulatory system attempts to maintain adequate oxygen levels within the retina. This is called Neovascularization and results in Proliferative Diabetic Retinopathy. These delicate vessels hemorrhage easily and blood may leak into the retina and vitreous, causing spots or floaters, along with decreased vision. In the later phases of the disease, continued abnormal vessel growth and scar tissue may cause serious problems such as retinal detachment and glaucoma.

Complete and comprehensive ophthalmic evaluation is important in the assessment of diabetic retinopathy. On a visit to a retina specialist, you will receive vision testing, eye drops to dilate the pupils and a complete examination of the front and back of the eye. Pupillary dilation may create near vision blurring and therefore, it may be helpful to have a driver accompany the patient, although this is not always required.

Types Of Tests To Assess Diabetic Retinopathy include:

Fluorescein Angiography – is a common, office-based diagnostic test that can help distinguish between non-proliferative and proliferative diabetic retinopathy. Fluorescein angiography is performed by injecting sodium fluorescein dye into a peripheral vein with a small needle. The dye then travels through the blood vessels and leaks through the abnormal blood vessels. After the test, patients will experience some transient yellowish skin discoloration and orange urine. Most patients tolerate the test well but a small percentage experience nausea and very rarely will have an allergic reaction.

Optical Coherence Tomography (OCT) – is a non-invasive, office-based imaging technique that uses a low energy laser to scan the macula and create a detailed map of the retinal architecture. OCT can help determine if there is fluid inside or beneath the retina which may indicate diabetic macular edema. It is a commonly used test to monitor the response to treatment of diabetic macular edema and has no risk to the patient.

Color Photography – patients may undergo color photography of the retina to document hemorrhages and other characteristics of diabetic retinopathy.

Treatment of diabetic retinopathy can reduce its progression and decrease the risk of vision loss. Early treatment is important because once damage has occurred, the effects are more difficult to reverse.

According to the American Academy of Ophthalmology, 95 percent of those with significant diabetic retinopathy can avoid substantial vision loss if they are treated in time.

Treatment for diabetic retinopathy depends on the stage of the disease and the specific problem that requires attention.

The majority of patients with diabetic retinopathy do not have any symptoms or decrease in vision.

These patients can be monitored carefully by their eye doctor with the frequency of the exams determined based on the severity of the disease.

There are now three different medications used by retina specialists to block the growth of new and leaking blood vessels in patients with diabetic macular edema. These medications inhibit Vascular Endothelial Growth Factor (VEGF) and therefore are called anti-VEGF agents. VEGF stimulates the growth of new and leaky blood vessels, which contributes to diabetic macular edema. The anti-VEGF medications are given by an intraocular injection administered in the office. All three medications have been studied extensively in thousands of patients and appear to be comparably safe.

Diabetic macular edema is also treated with injections of steroid medications into the eye. These medications reduce the inflammation in the eye that may contribute to the leakiness of blood vessels.

To prepare for an injection, the eye is cleaned with antiseptic solutions and numbed with topical anesthetic gel or an injection of anesthetic into the eye.  Injections are administered according to the patient’s response to treatment until the patient’s vision is stabilized and the leaking blood vessels have dried up. Ongoing treatment may be needed to control the disease.

The frequency and number of injections needed varies considerably among patients. The risks of intraocular injections include hemorrhage, retinal tear, and infection, all of which are very rare. The injection of steroid medications may increase the risk of cataract and elevated eye pressure (glaucoma).

Patients should call their doctor if they experience increased pain or decreased vision in the days following an injection as these symptoms could indicate a serious infection.

The treatment of macular edema is called Focal Laser Photocoagulation. Focal laser treatment targets the abnormal blood vessels that leak and bleed. Focal laser may be used as adjunctive treatment to anti-VEGF or steroid injections to allow for a longer duration of effect. However, focal laser can destroy surrounding tissue and can therefore only be used on leaking blood vessels outside the center of vision (called the fovea).

Pan-retinal Photocoagulation (PRP) targets areas of the retina that are not receiving adequate blood flow and are sending signals to create new and abnormal blood vessels. PRP is used to treat patients with ischemic RVO who have certain high-risk characteristics. PRP can help prevent the complication of neovascular glaucoma but will not improve the patient’s vision.

The material contained on this site is for informational purposes only and is not intended to be a substitute for professional medical advice, diagnosis, or treatment.

Always seek the advice of your physician or the other qualified health care provider.